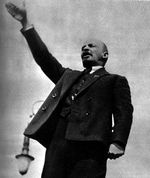 Although Lenin was ruthless he was also pragmatic. When his efforts to transform the Russian economy to a socialist model stalled, he introduced the New Economic Policy, where a measure of private enterprise was again permitted, a policy that continued for several years after his death. In 1918, Lenin narrowly survived an assassination attempt, but was severely wounded.